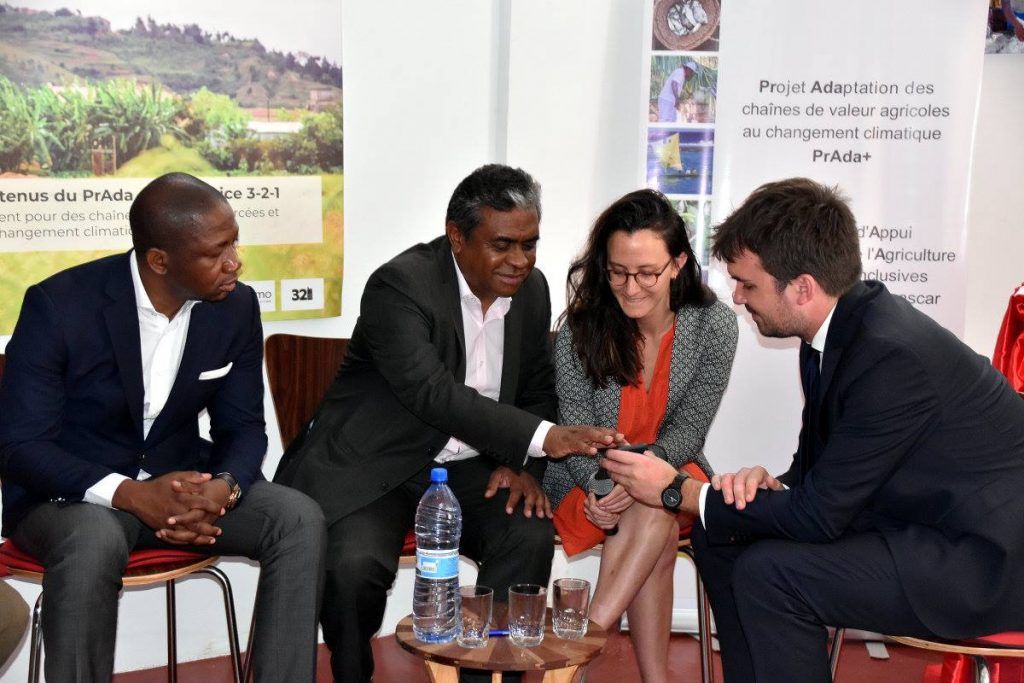 Climate change has been a growing challenge in Madagascar, with smallholder farmers particularly affected by increasingly frequent climate shocks.

German development agency GIZ led the “Adaptation of agricultural value chains to climate change” or PrAda project to help address this issue, mandated by the German Federal Ministry for Economic Cooperation and Development, and co-funded by the European Union.

One of their initiatives was launching a climate risk microinsurance product for these farmers in cooperation with the InsuResilience Global Partnership. However, most Malagasy smallholder farmers had limited knowledge about insurance. Therefore, Viamo and our gamification partner, Peripheral Vision International (PVI), developed together with GIZ an interactive mobile audio game to educate farmers on the concepts of microinsurance and climate change, and to boost uptake of the microinsurance product.

The game was officially launched nationwide by the Secretary General of the Ministry of Agriculture in Madagascar in 2018 on our existing Viamo Platform with Airtel Madagascar. Early stage results showed that more than 100,000 platform callers had played the game until the end, and about 50% had expressed interest in being contacted as soon as the new insurance launched.

Viamo Platform callers who accessed the audio game had listened to twice as many key messages per month on average, compared to listeners who had not played the game yet. These early results indicated that games are an effective content style to maintain listener interest.

The content for the audio game was developed through field research and Viamo’s human-centered design experts, to ensure that it was actionable, culturally relevant and entertaining.

In the resulting gameplay, players walked through seven cropping seasons in a series of listen-then-make a choice steps. In each season, the virtual farmers attended an annual agriculture fair, where the learning and decision-making were framed within conversational dialogue between peers and friends. Good choices were rewarded with a growing number of Zebus, Malagasy cows, rather than points or money, as it is a more culturally relevant form of game currency.

Given the complexity of climate risk insurances, the game focused first on climate change and how smallholders can react, with the concept of microinsurance gradually introduced.

At the end of the game, players indicated if they wanted to be contacted to sign up for the climate risk microinsurance. Before the insurance product was developed and launched, we already had a list of leads with demographic information. This information could then serve to segment the farmers and help the insurance company prioritize their outreach. In this way, gamified content on mobile not only increased engagement, but also helped generate quality leads.

We continuing to A/B test different ways to develop the game further. The next steps were to re-design the game once the microinsurance became available for farmers, to incorporate information about how the specific insurance product worked. Due to the success of the educational game, GIZ began working with Viamo to develop a similar solution in Zambia.